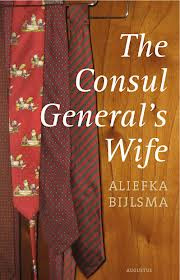 Melchior, Holland’s Consul General in Brazil, is one of the ‘old school’ of career diplomats.  He enjoys the privileges and the personal power the post confers on him.  But times are changing - budgets are being cut, there’s a new ethical code and new political masters who have sent him a young deputy, Tygo, bent on observing the new diplomatic code to the letter and with instructions to  impose strict budget guidelines.

The story opens with the arrival of a young intern, the daughter of one of Melchior’s old friends.  Nikki is very attractive and very aware of her own powers over men.  More than a match for the licentious Melchior.  Quite unconsciously, Nikki, will contribute to her boss’s downfall.

The Consul General is cared for by a Ghanaian woman, Mercy, who was ‘rescued’ by him 18 years ago, and who cooks, washes and cleans for him, managing his household in the way a wife would do.  Melchior’s actual wife, Leandra, a gifted photographer, considerably younger than her husband, lies in a guest bedroom, suffering from ME, often referred to as chronic fatigue syndrome.   Leandra is a convenient scapegoat for Melchior when things begin to unravel for him.

The author explores the physiology and psychology of ME with great insight.  Leandra is being destroyed by it.  But she is determined to regain her health and get her life back. Her long sojourn in solitude forces her to think very deeply about her life and her career and what kind of future she wants to have.

The novel is very, very well written - a wonderful exploration of the relationships between five people - Melchior, Leandra, Tygo, Nikki and Mercy.  The book touches on some interesting subjects and makes the reader think about a lot of different issues. There is more than one type of colonialisation -  and what exactly is national identity? To what extent are we the product of our childhoods?  How are the mind and body interlinked?

Originally published in Holland by traditional publishers, Aliefka Bijlsman has commissioned an English language edition and published it independently.  She was the first Dutch author to Crowd-Fund the translation of a book.(Aliefka tells the story of how she did it here.)  I really can’t understand why the novel wasn’t taken up commercially world-wide. The story is high quality literary fiction (it’s been compared to Graham Greene). The translation is expertly done. I had no sense that the novel had not been written in English - I can’t praise the translator enough.  There are half a dozen typos the proof-reader missed, but they didn’t spoil my enjoyment - there isn’t an e-book out there, whether it’s a Random House or an Indie, that doesn’t have some digital glitch or 3.

The book is a slow burn - but it repays close attention.  After I’d finished the book (a very satisfying ending and not at all predictable!) I went back to the beginning to read the first chapters again.  The Consul General’s Wife comes very well recommended - and not just by me.

Scott Pack said:
“It is uncomfortable reading at times, but also quite captivating. I was reminded of Borgen in places because of the look inside the home lives of political individuals, but most of all of Thomas Kennedy's Falling Sideways which I read earlier in the year."