I love crime fiction and have become addicted to the Italian detective Salvo Montalbano, created by the Italian author Andrea Camilleri.  The novels are set in Sicily and you can feel the heat radiating up from the arid landscape, and smell the sea - just right for someone feeling nostalgic about Italy. 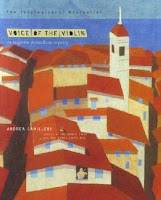 At first glance the central character isn't particularly endearing - he's a complete bastard to work for, tetchy, jealous, egotistical, but one hundred per cent straight in a landscape where most people can be bought.  That's why his dedicated team stay with him.   Though why his long distance girl friend puts up with him is more than I can fathom.  He is totally commitment phobic and treats her even worse than his police officers.  But then, as I've observed over there,  Italian women seem to expect very little of their men.

What is good about the novels is the quality of their plots. The complex structure of the rival police forces in Italy allows for almost unlimited complication, and then there's the existence of the Mafia.   There's no lack of killing in Sicily and even the most extreme violence seems credible in that setting. 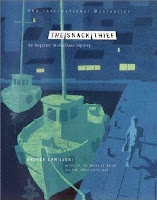 I've read the first 5 novels and so far each one of them has held my attention from beginning to end and I'm starting to develop a soft spot for the irritable Sicilian.  It's partly the food - he's addicted to good cooking - sea bream grilled with garlic and lemon, home made pasta with a delicate sauce made from octopus,  aubergines grilled with parmesan .......    I'm salivating just thinking about it.   The novels are  a combination of Morse and Masterchef and - judging by the number Camilleri's sold - it's a winning formula.
Posted by Kathleen Jones at 22:29 1 comment:

Sue Gee: The Mysteries of Glass

I have recently re-discovered Sue Gee. A couple of years ago I read ‘Reading in Bed’ after I heard an episode on BBC radio. It made me laugh, and I really enjoyed it. I marked her out as an author I should read more of. But somehow she had slipped from my view. Then I found her novel ‘The Mysteries of Glass’ on a second hand book stall and saw that it had been listed for the Orange Prize.

I was riveted from page one and read every word of the beautifully structured prose. It’s set in late Victorian England and the central character is a young, idealistic curate posted to his first parish in a remote country location. He is innocent, virginal, and is shocked to find himself deeply in love with a woman within a few days of his arrival. Especially as that women is the Vicar’s wife, trapped in a loveless marriage with a man twice her age.

This is how it begins.

‘Richard entered the room. He saw the cold winter light at the casement overlooking the churchyard; the faded carpet, and horsehair ottoman; the round table with a pile of Blackwood’s Magazine; the oil lamp. He took in the plainness and darkness of it all, the leaping flames of the fire almost the only colour in the room, for the cat asleep on the fireside chair was the most solid black, and the young woman standing by the mantelpiece had hair and skin as pale as milk, and her gown was as pale as a dove.’

In this country parish the Victorian double standard is rife and Richard is pitched into a world of such moral complexity his simple religious faith is inadequate to deal with it. There are no lurid sex scenes, or melodramas, just a quiet intensity building to an ending that is exactly right. I’m now going to seek out every other book by Sue Gee and take them off to Italy with me, particularly The Hours of the Night and Letters from Prague.

I was surprised to find that she is not a young writer - she’s been around, publishing novels, since 1980. Currently programme leader at Middlesex university and, like all of those writers who need to teach Creative Writing to survive, reading for the necessary Ph.D in Creative Writing. A complete waste in my opinion - she should be writing another wonderful novel.