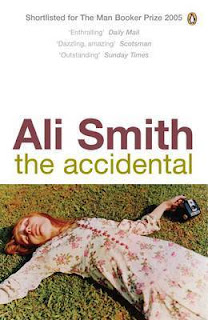 Just every now and then you read a novel that really does knock your socks off.   This one is so experimental and off the wall that it genuinely astonishes.  Ali Smith's textual fireworks are amazing.  There's a section written in sonnet form (the character's whole life has turned to poetry) and most of the narrative is stream of consciousness, inside the head stuff though refreshingly written in 3rd person.   And it convinces.  Each character's thought process is unique.  Only the central character - the hub around which all the others revolve, is missing from this.  We see Alhambra/Amber from every point of view except her own.  She is a Mystery.  But she is also a magical, healing, and sometimes destructive,  force.

The family is in deep trouble, though they are all in denial.  They have taken a holiday home in Norfolk and are playing at happy families.  But the step-father, Michael, a university lecturer (or more accurately lecher)  is running away from complicated affairs with his students; the mother, Eve, is trying to pretend that she is writing a book, but is suffering from writer's block; the son, Magnus, is suicidal because he believes he has caused the death of a girl at school; and the 12 year old daughter, Astrid,  has withdrawn into a silent, obsessive world because she is being bullied.   No one is telling anyone anything.

Until a young woman walks through the door and takes up residence.  The family are so dysfunctional no one asks anyone else whether they have invited her.  And once Amber  has her feet under the table nothing can ever be the same again.  She is both the maggot in the apple and the good genie in the lamp - handing out wishes.

This has to be one of the most original novels written in the last decade - the pyrotechnics are wonderful, but its unconventional nature makes it very difficult to review.  On Amazon readers either thought it 'wearisome drivel' or 'the best thing I've ever read....  this book will change your life....'   For me it's a clever, post-modern exercise in playing with traditional ideas of narrative and a good example of prose poetry.  The writing is so original I was always hooked enough to read on.  The Accidental really deserved its Orange Prize listing and Ali Smith deserves to win a whole shed load of prizes!

This is classed as Young Adult Fiction, but is a good adult read too.  I read quite a bit of YA - all the classics as well as  JK Rowling, Philip Pullman, Alan Garner, Michelle Lovric, Jackie Wilson, Judy Blume and quite a few more I stumble on.  Once I prowled through the bookshelves for my own children, now I do it for their children.  The quality always impresses me.  Writing for children and Young Adults has to be good.  You can't get away with a dodgy plot, masses of description, pretentious writing.  The story-line has to be strong and clear, the writing has to be exact and the narrative compelling.  Oh, and the characters have to be ones that you can recognise and have a conversation with.

Speak, (If only  I could find the Words) is one of the best I've read.  It's set in America, but isn't too american for an english audience.  The story is Melinda's.

'It is my first morning of high school.  I have seven new notebooks, a skirt I hate, and a stomach ache .......  I am clanless.  I wasted the last weeks of August watching bad cartoons.  I didn't go to the mall, the lake, or the pool, or answer the phone.  I have entered high school with the wrong hair, the wrong clothes, the wrong attitude.  And I don't have anyone to sit with.   I am Outcast.' 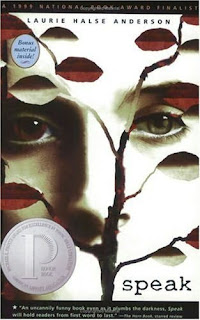 Melinda has been cast off by her friends (because of something that happened at the beginning of summer) and has stopped speaking, even to her family. She is obviously deeply troubled. We find out why about half way through the book - and it isn't the obvious reason. The world, seen through Melinda's eyes, is disjointed and tricky. The book is often funny, sometimes dark, exploring the puzzling process of adolescence and the problems of developing sexuality. Melinda is a feisty girl - she gets her voice back and becomes a winner.

It's interesting that some recent prize-winning books began as YA titles - The Incident of the Dog in the Night, and Emma Donaghue's 'Room'.  I'm certainly going to be looking for more things by Laurie Halse Anderson.